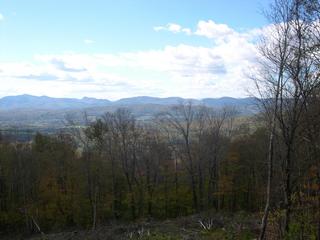 Trooper Murphy sauntered out the door of the Dunkin Donut shop to his Vermont State Police cruiser that bright June morning. Nothing much had been going on in Rutland. Nothing much ever went on in Rutland. Nothing other than the occasional million-dollar armored car rip off during the ski season, or the private plane crash into a mountainside now and then. Funny how pilots couldn't seem to see those 3,000-foot rock and tree-covered obstacles sticking up in front of them.

Red, the busiest squirrel in town, sat on the power pole across the parking lot from the trooper's car. Red was also the chief telephonist on the animal grapevine. He was the fastest talker the animal kingdom had ever seen, at least in these parts.

"All units be advised." The voice over the radio rose in a feverish pitch – something was actually happening in Rutland! "A tractor-trailer, JP Hazel Nuts, has crashed at the intersection of US 4 and US 7 in Rutland and has broken open. Cargo is obstructing the intersection in all directions -- "

That was all Red needed to hear. And it was off!

"EVERYBODY! A WHOLE GIGANTIC TRUCKLOAD OF HAZELNUTS JUST DUMPED OVER IN RUTLAND, ROUTE 4 AND 7! HURRY!"

Red squirrels, grey squirrels, flying squirrels, chipmunks, mice, turkeys, partridges, grouse, deer, moose, everybody in the woods and fields with a taste for nuts started to move, and move FAST! No one wanted to get left out. Everyone knew those other greedy critters wouldn't leave any for latecomers. So the race was on.

The branches began to flutter. Then they began to shake. Then they were cracking and flying off the trees. In moments the trees themselves were shuddering and bending with the wind of the passing herds. Before long, the ground was shaking. Shaking so bad the U.S. Geological Survey's seismic tables were going nuts (pardon the pun), the pens jumping everywhere with the earthquake of the thundering herds. Trees began crashing to the ground in the forests. The land was churned to muck as if it were mud season all over again. (God help us!)

Ash tree borers and tent caterpillars fled the woods for the safety of quieter lands (much to the relief of the Vermont Forestry Service.) All those slimy bugs on the highways caused traffic to slow down to twenty miles per hour on I89 and I91, with slippery conditions so severe that drivers with four-wheel drive engaged them as if mud season had truly come again. Auto parts stores and body shops had a booming business for weeks repairing cars and trucks damaged by deer and moose and hordes of smaller critters swarming into and over vehicles in a rush to get to the nutty delicacy. There hadn't been a bigger mess around here since Hurricane Irene roared through back in 2011!

Thousands of deer began to roar into town. Hundreds of moose thundered with them. Millions of squirrels, chipmunks, turkeys, pheasants, quail, and God knows what else descended upon the hapless Rutlanders minding their own business in the park at the intersection. Mothers began to scream and clutch up their babies. Children thought it was a great adventure – until they were run over by small hirsute creatures intent on getting to Hazel Nuts. People were thrown to the ground and trampled under hoof and paw. Elderly ladies shrieked as furry rodents dashed up their dresses in the race to get to the nuts. Elderly gentlemen flailed mightly with walkers and canes at the offending critters. Grown men began to weep. Weep out loud – at the sight of so much venison and fowl, and no weapon to shoot them!

Trooper Murphy, tears streaming down his face, could only call back to the barrack for reinforcement and watch as all that wildlife milled about wondering where the nuts were. For there on the ground, in the middle of town, were forty tons of JP Hazel lugnuts.

The Great Stampede
A bit of silliness

Where Has The Tall Grass Gone?
a poem about the West